A heavy duty security safe can loom like a grand metal Sphinx within a residence or 2nd-floor office. Extra heavy-duty safes are designed to weigh tons and are nearly impossible to move. Depending on the layout of the moving space, additional specialized equipment may be needed to move the safe up and down stairs or over grassy and/or asphalt areas of terrain. The transportation of a safe alone can seem a conundrum that can eventually find resolution within the worlds of hardware and machinery, can make the moving process dramatically easier, and need not include any iron pipes and golf balls to roll along underneath.

2. Professional Movers are Most Likely Necessary

Professional safe movers will have the most heavy-duty equipment that is built to move safes that are hundreds and perhaps well over 1,000 lbs., in a few swift and efficient maneuvers. They will also supply ramps, rollers, and transporters that are marble and tile safe, carpet protectors, and safe jacks that should have up to 5,000 lbs. capacity, as well as electrical stair-climbing machines. Professional companies have better transportation capabilities, providing trucks with GVW ratings that can hold up to 24,000 lbs., reinforced trailer beds, and specialized lift gates. 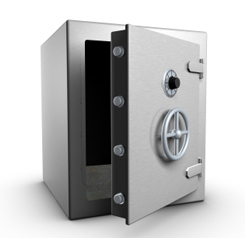 Keep in mind the Gross Vehicle Weight Rating of the transport vehicle. The GVWR number is the amount of weight a vehicle can carry, and the vehicle’s GVW should not be loaded beyond the GVWR. The gross vehicle weight is different from the GVW and is the measurement of how much the vehicle itself weighs as opposed to how much it can load. Passengers riding in the transportation vehicle along with the safe will add to the GVW, but a trailer, if attached to the vehicle to load the safe, will not add to the GVW.

The trailer hitch on the vehicle that attaches to the apparatus on the trailer, called the tongue weight, is already included in the GVWR and does not need to be counted.

GVW rating is important. Safe movers will need to add the estimated weight of the safe as well as any machinery or equipment affixed to the vehicle in with the GVWR to prevent damage when moving a safe.

The way to estimate the loadable weight is to add the GVW gross vehicle weight to the weight of the safe being loaded onto the truck or automobile. Therefore, if an auto weighs 5,200 lbs. and the GVWR is 7,000 lbs., then 1800 additional pounds can still be loaded on.

4. Was Your Safe Dropped Off Outside?

It is common for a heavy-duty safe company to deliver a new safe to a consumer by dropping it off in a truck on the curb, on the driveway outside, or perhaps somewhere else on the property, stacked on top of a crate, and then simply drive away. Depending on the weight of the safe, a standard refrigerator dolly might work sufficiently to move it indoors. Push the safe on the very top while pushing the refrigerator dolly underneath. Then on the other side of the safe, push the safe, again from the very top, so that the wheels of the dolly catch and begin to roll. Once indoors, remove all of the inner contents of the safe to lighten the load and push it back using upward and back force in order to place it in the desired area of the home.