The CMSA is a non-profit association that represents nearly 500 movers operating in California. Founded in the early 20th century, the organization provides educational and informative programs for its members.

With a dozen chapters located up and down California, the CMSA provides a great deal of structure and organization to the California moving companies that are part of it.

In order for a moving company to join the CMSA, they must be licensed and insured. In addition to this, they must also agree to a code of ethics, which outlines their pledge to operate honestly, efficiently, and legally.

Employees of a CMSA company must be trained and highly skilled in order to ensure that the best services are being provided.

In recent years, the CMSA has made an effort to reduce the amount of waste that comes from commercial and residential relocation. They have set up recycling centers, where consumers can safely recycle old electronics, as well as glass, paper, and plastic products. These recycling centers are located inside CMSA member facilities. These recycling facilities are available to customers at no cost, which is a good thing, considering how much moving costs these days.

The CMSA has also made attempts to bring new life to the cities around its member facilities, with an understanding that good business cannot be conducted in an unfit atmosphere. Group efforts have been made to develop education and community programs to ensure that California communities thrive. The organization has also made donations to charitable organizations in communities where it is needed most.

People wishing to relocate within the state of California should choose a CMSA-approved company to ensure that they are getting the best service possible.

Who Regulates Moving Companies in California?


When reaching out to local California moving companies, make sure to check their Cal-T number, which is given out by the California Public Utilities Commission. Moving companies that transport household goods must get permits from the PUC after proving safety and financial standing. They must additionally prove that they have adequate insurance.
The Agency: California Public Utilities Commission
The Address: SSRS Unit 505, Van Ness Avenue, San Francisco, CA 94102-3298
Phone Number: (800) 848-5580
The Website: http://cpuc.ca.gov
U.S. DOT is not Required in California,
A PUC number is required in the State of California is you want to be a house hold goods carrier. Visit www.dot.ca.gov for more info.
Mover that want to obtain permits from the PUC must contact licensing@cpuc.ca.gov
Many Moving Companies are members of the California moving and storage association.

The PUC requires informational  booklet to be provided by all movers, to there customers without charge planning to move between points within California. 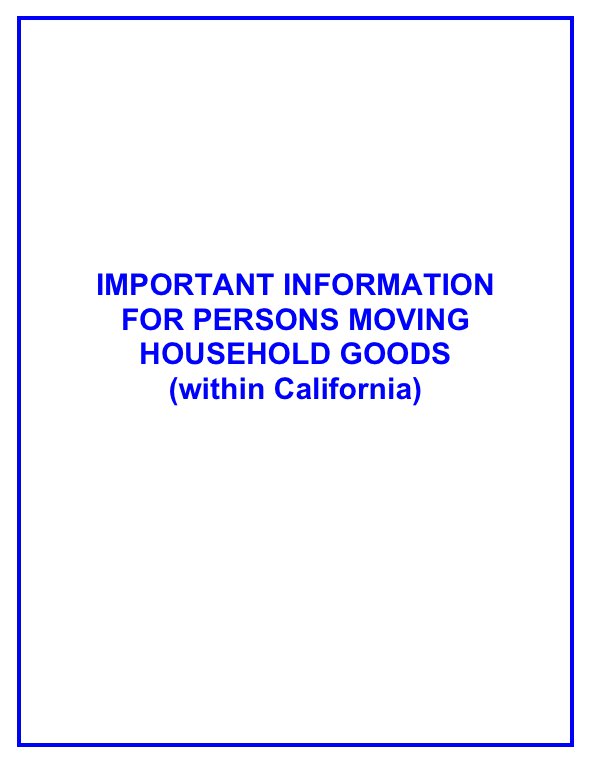