How to Properly Use a Safe Dolly

Stair climbing dollies with motors are usually capable of lifting around 1200 lbs. They may have several more premium options, such as automatic rewinding safety straps. They might have added wheel attachments, retractable load support, and lift hitch attachments. Automatic rewinding safety straps make harnessing a heavy safe to an appliance easier. A pneumatic wheel attachment can help when traveling greater distances. It allows rolling on 4 wheels.The 4th wheel is removed before climbing stairs where the gearbox will be operating and lifting the safe up each step.

2. Safety is Most Important

Movers reading about safe dollies probably realize that moving an extremely heavy safe alone is difficult. to only this, but it is also dangerous. It might put a mover at greater risk for an arm, lower back, and leg pain and injuries. If the job goes completely awry, a could pull a muscle or break a bone. It is best to have at least one other person to help. If there is an absence of volunteers then locate professional safe movers available for hire online.

Moving a safe using the fully manual type safe dollies normally requires a set of 2 dollies, one device on either side of the safe.

Hydraulic type safe dollies can lift more weight, closer to 3950 lbs., and have a built-in hydraulic track that creates the lifting action. Despite the design of the dolly to handle heavy loads, it is best to first lighten the load by emptying the entire contents. It may need at least 2 people to tip the safe onto the dolly and/or hold it steady while it is in transit. Clear the area of any breakable items or persons standing nearby the moving dolly in case falls on something or someone. This can cause serious injury. 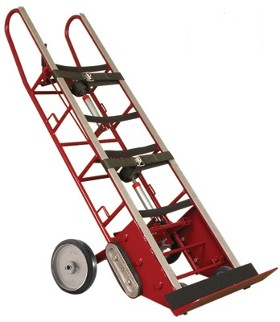 5. Hiring a Professional is Much Safer

Overall, you are much better off using a professional if you need to move. Consider how the cost of working with pros compares to suffering injury as a result of the improper moving of a safe. Since are so heavy, most people cannot safely move them. It does not take a lot to get the of a professional, especially if you use Moving Authority.

We are moving over state lines and have our gun safe which includes 3 guns. Do we require a special permit to move these and will the moving company be allowed to move them for us?