HOW TO MOVE FURNITURE

How to Move Furniture

Think about applying a technique for every piece of furniture that you move. The back and spine are at risk for injury during a move. An industrial work belt provides lumbosacral support and helps to prevent next-day lower back pain by reducing pressure. This type of back support also works great for long distance driving. Locate industrial work belts at the drug and retail stores.

It’s important to lift furniture with one's legs while keeping the back and torso straight. Raise the furniture up by squatting, lifting the objects from their strongest point. Protect the hands by wearing rugged leather gloves that grip. Experts recommend avoiding cotton gloves for moving furniture because they are too slippery, leather will protect the hands from slippage and sharp edges. 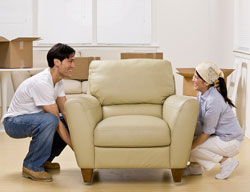 It is best to have help, several helpers if possible, not only in terms of effort but also for the benefit of safety. Occasionally though, movers have to do everything themselves, perhaps because there is no one available or if they have to move quickly.

Self-movers should equip themselves with the proper moving tools. Rent or purchase a hand dolly, for moving boxes and a floor dolly, to move furniture, in order to put these appliances between one’s own body and the entire crushing weight of these objects. It is helpful to position wheeled moving equipment against a wall so that they don’t roll away while being loaded. Before commencing, create a plan of how the furniture will be moved. Remove any low hanging obstacles like lighting fixtures, paintings, and other fragile items from the tables and shelves.

Empty all of the drawers, cabinets, and shelves to avoid collisions with things like large dictionaries, which could fall down and clock someone in the head.

4. Pads and Blankets: For Protection

Moving pads and blankets can make an enormous difference in a move as they reduce the stress placed upon a mover’s body and also upon the furniture being moved, creating an overall better experience. Use moving blankets to drag very heavy pieces instead of lifting them. Sliding as opposed to lifting and hoisting heavy objects, creates fewer opportunities for accidents and damage. Slide the furniture by placing moving blankets and pads underneath, making sure the object is properly packaged. Rent blankets and pads from container moving services, truck rentals, and freight company movers. If the moving company or local rental supply shop does not offer them or is too expensive, they are important enough that they should be purchased from a home improvement store. In some cases, towels and cardboard will work sufficiently in place of moving blankets.

Eliminate the friction beneath a sofa by cushioning its legs, and on other heavy items, to avoid damage to wood floors. Packing them this way will also help furniture to slide easier. Place two boards on stairs to create a ramp and easily slide the furniture down. A ramp can also be fashioned out of thick blanket layers, laying them over the stairs. Furniture moving straps enable 2 people to lift more weight than they normally would without them. Another handy gizmo, which is great for those on a budget, is to use broom handles as sliding rollers, placing them beneath very large and heavy items, which gets them moving along.