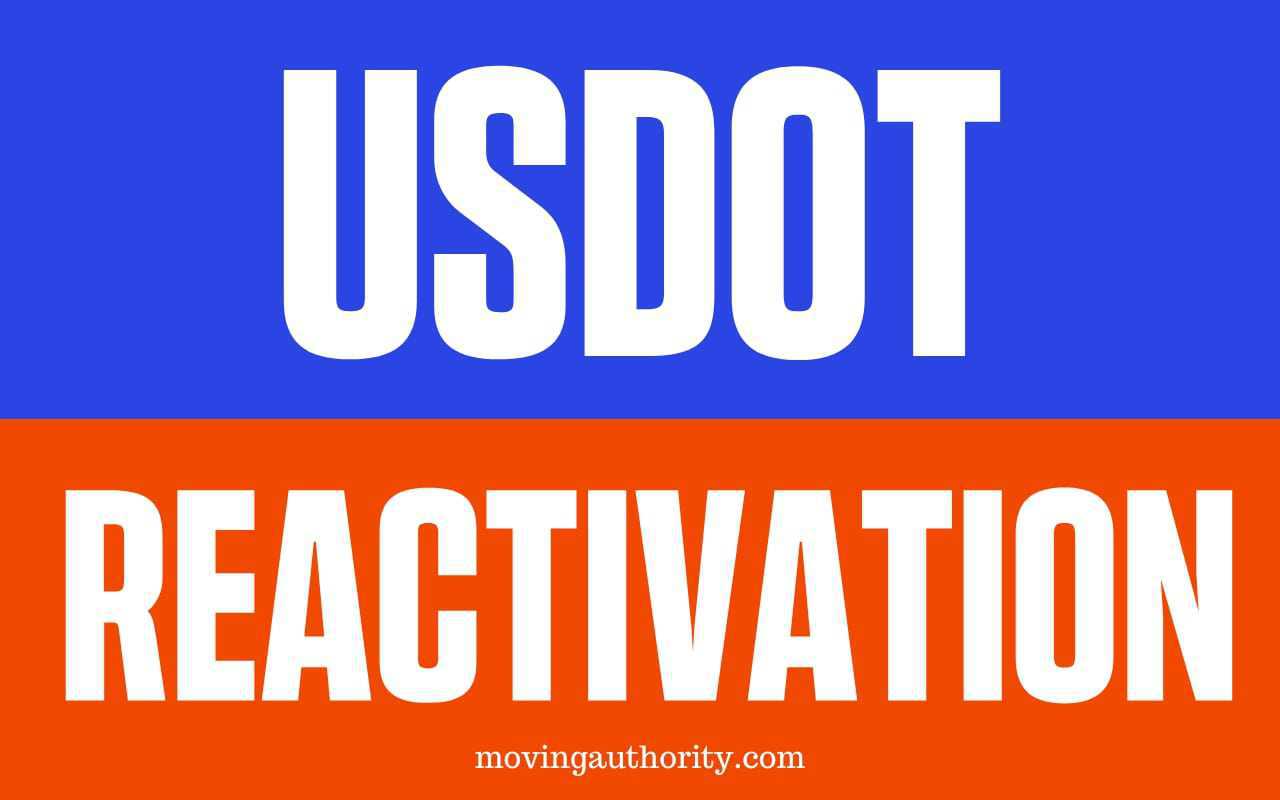 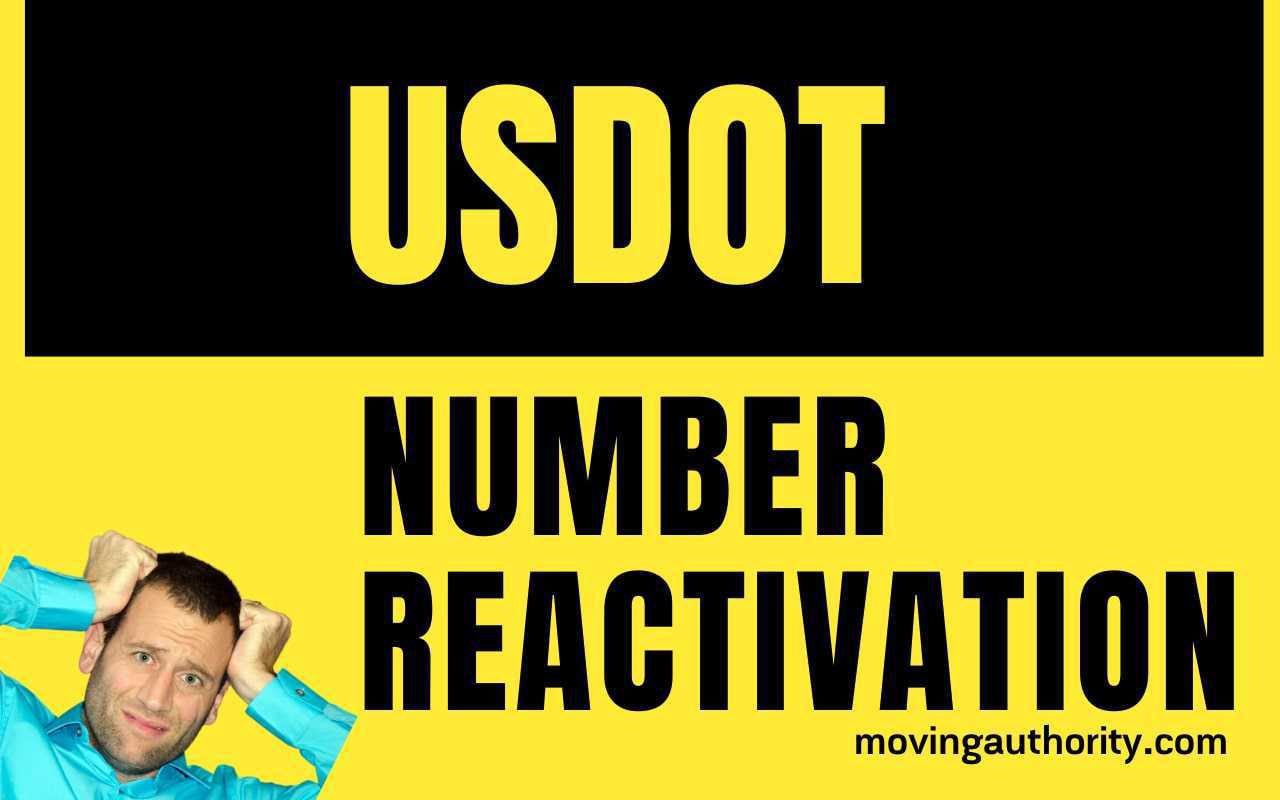 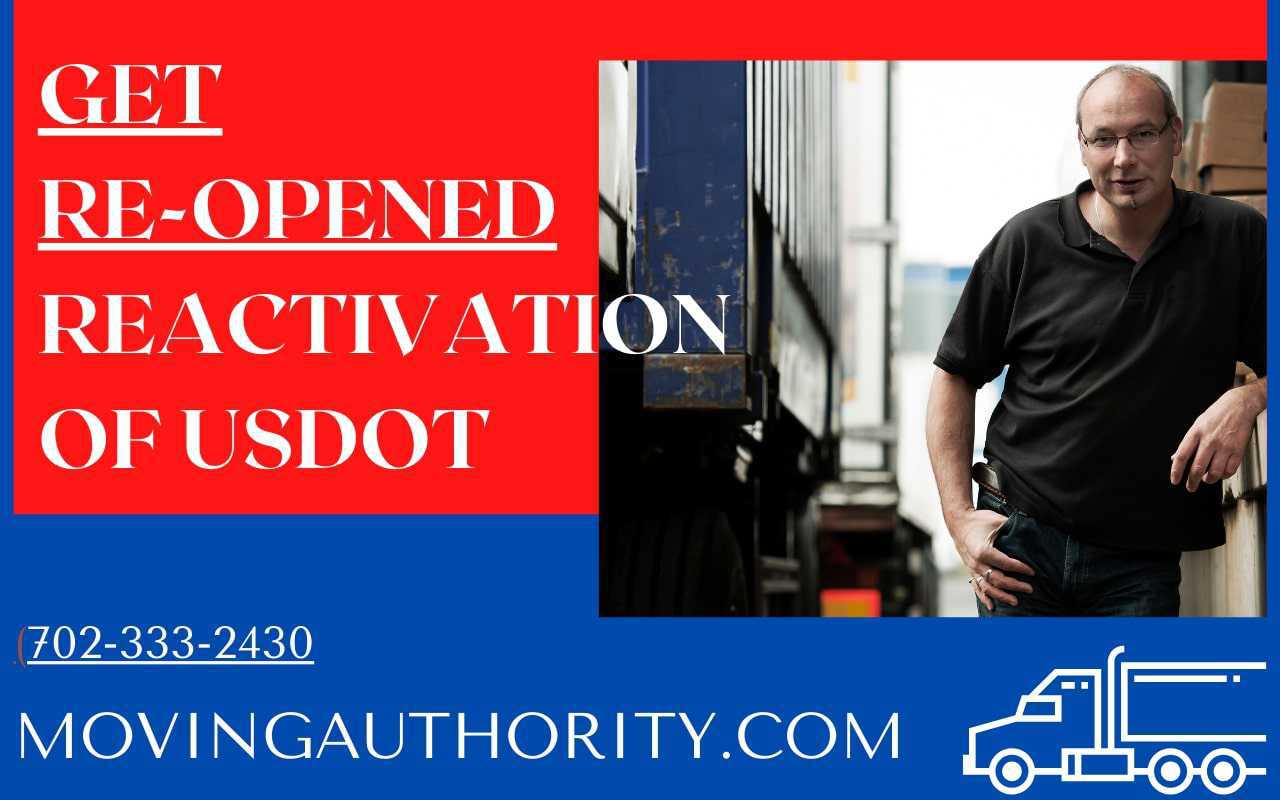 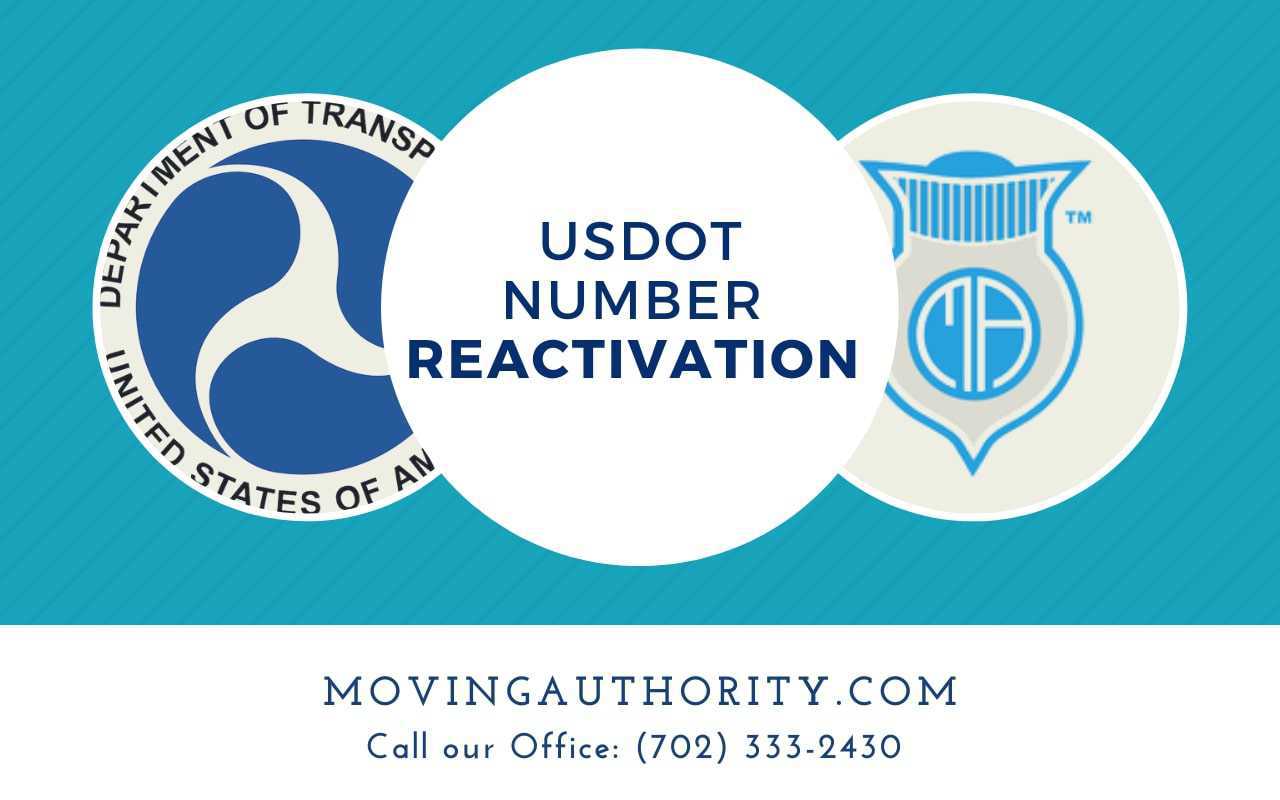 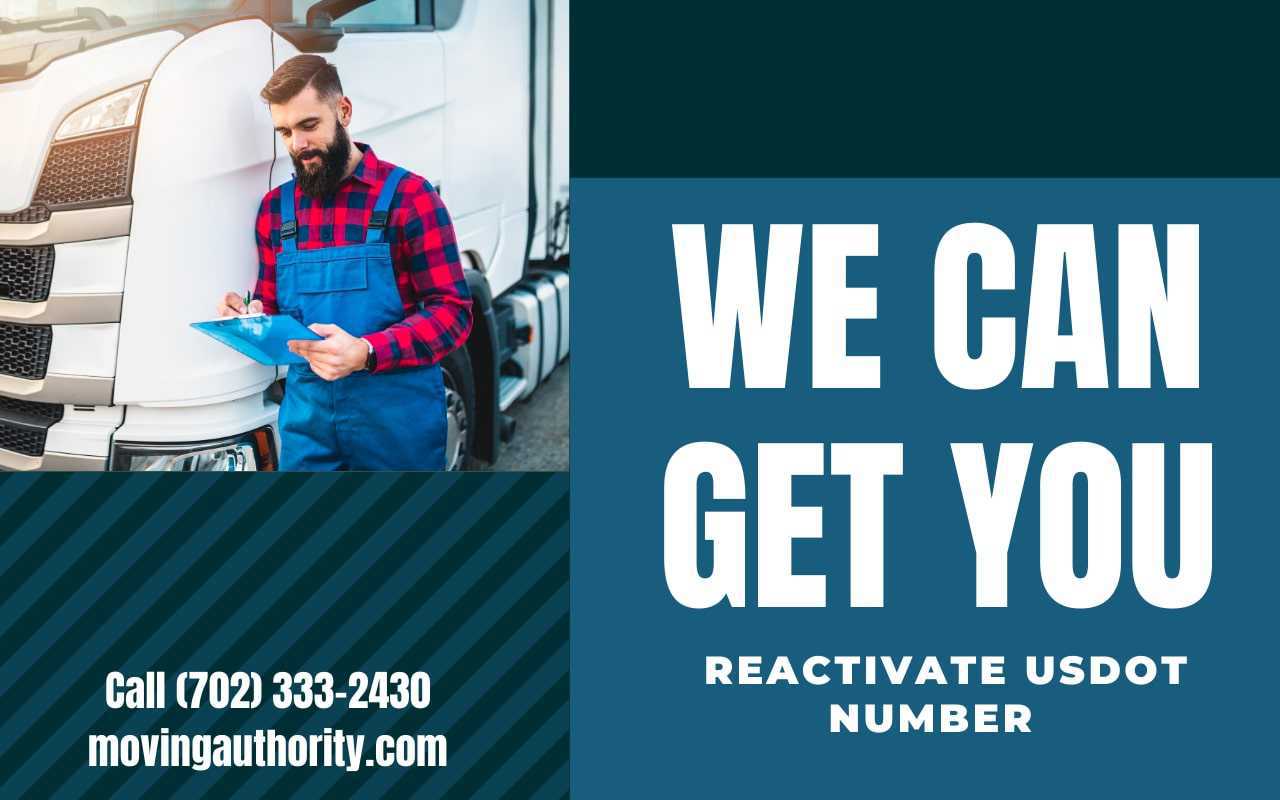 Companies should pay close attention to USDOT Number reactivation policies. Why? So that they are always in good standing with the government. This will help prevent losses in revenue and profit margins. Reactivating a USDOT Number is a simple process. Please read below to learn how to do it.

How to Do USDOT Number Reactivation

Let’s begin with the first step of USDOT Number reactivation. You must assess what your USDOT Number status is at this moment. It’s easy to look up the status. All you need to do is go to the FMCSA SAFER Company Snapshot website. Once you log-in, the reactivation status might say one of the following two things.

1. Record Inactive.
2. Inactive USDOT Number per 49 CFR 390.19(b)(4). If #2 is at play, that means a biennial USDOT update has not gotten completed. Whether you see #1 or #2, it means that you must complete and submit a report. That report's known as the Motor Carrier Identification Report. The official form has its own name. It’s called Form MCS-150. Submitting that form will put you in a position to reactivate your USDOT number.

You can find Form MCS-150 on the FMCSA website. The site lists directions about how to sign and submit the form. Never use a form that comes from another website. Why? Because the FMCSA updates its forms on a regular basis. You do not want to risk submitting an outdated form. The FMCSA has a reputation for rejecting the following three forms, if outdated.

Say that after the New Entrant revocation, you need to reactivate a USDOT Number. This also means that you should use the FMCSA website. But you will need to follow separate reactivation instructions that the FMCSA provides. These instructions are easy to find on the site. Has your operating authority gotten revoked?

If so, you need to reinstate it ASAP. You can also do this through the FMCSA website. The key to doing so is having a clean USDOT Number record. This refers to a record that is up-to-date and active. Otherwise, processing delays could take place while requesting reinstatement. There is one other option for this process. You can also submit the MCS-150 form. But keep in mind that the form must go alongside a reinstatement request.

Knowing your PIN number can help you with USDOT Number reactivation. Say that the USDOT status reads: Inactive USDOT Number per 49 CFR 390.19(b)(4). This means that you should get ready to input your USDOT PIN. That is the fastest way to reactivate when receiving this message. Have you forgotten your PIN? Or, do you need a new one?

Either way, you can request a new PIN on the FMCSA government website. Resetting a PIN number does not take much time. Plus, having one is crucial for reactivating your USDOT number or MC Number.

The FMCSA website also features co-browse functionality. This means that an FMCSA rep can help walk you through the USDOT Number reactivation process.

USDOT Number reactivation processes can take place through fax or mail. All you have to do is mail or fax a completed MC-150 form. Make sure that the form's addressed to the FMCSA. There are two common situations in which faxing or mailing the form is ideal.

1. You need to reactivate the USDOT number due to having an incomplete biennial update. When it comes to this, you've got to make sure the processing is correct. You can do so by checking off the box with the following title: Biennial Update. You might also need to check off this box: Changes in the Reason for Filing.

2. You are reapplying for a USDOT Number because your status has gotten revoked. The most common status that gets rejected is the New Entrant status. If this is the case, you should go over to the Reason for Filing section. Next, check off the following box. Reapplication After Revocation of New Entrant.

Make sure that you double-check expiration dates before mailing/faxing forms. You don’t want to risk having to begin the reactivation process again from scratch. The USDOT and FMCSA are strict about not accepting expired forms. In fact, the rejection of all expired forms became an official FMCSA policy in 2018.

Just got USDOT reactivated thanks a lot.

Just got USDOT reactivated thanks a lot.

There are certain characteristics of a truck that makes it an "off-road truck". They generally standard, extra heavy-duty highway-legal trucks. Although legal, they have off-road features like front driving axle and special tires for applying it to tasks such as logging and construction. The purpose-built off-road vehicles are unconstrained by weighing limits, such as the T 282B mining truck.

FMCSA has reached its goal of at least 40,000 certified MEs signing onto the registry. All this means is that drivers or movers can now find certified medical examiners throughout the country who can perform their medical exam. FMCSA is preparing to issue a follow-on “National Registry 2” rule stating new requirements. In this case, MEs are to submit medical certificate information on a daily basis. These daily updates are sent to the FMCSA, which will then be sent to the states electronically. This process will dramatically decrease the chance of drivers falsifying medical cards.

Heavy trucks. A cement mixer is an example of Class 8 heavy trucks. Heavy trucks are the largest on-road trucks, Class 8. These include vocational applications such as heavy dump trucks, concrete pump trucks, and refuse hauling, as well as ubiquitous long-haul 6×4 and 4x2 tractor units. Road damage and wear increase very rapidly with the axle weight. The axle weight is the truck weight divided by the number of axles, but the actual axle weight depends on the position of the load over the axles. The number of steering axles and the suspension type also influence the amount of the road wear. In many countries with good roads, a six-axle truck may have a maximum weight over 50 tons (49 long tons; 55 short tons).