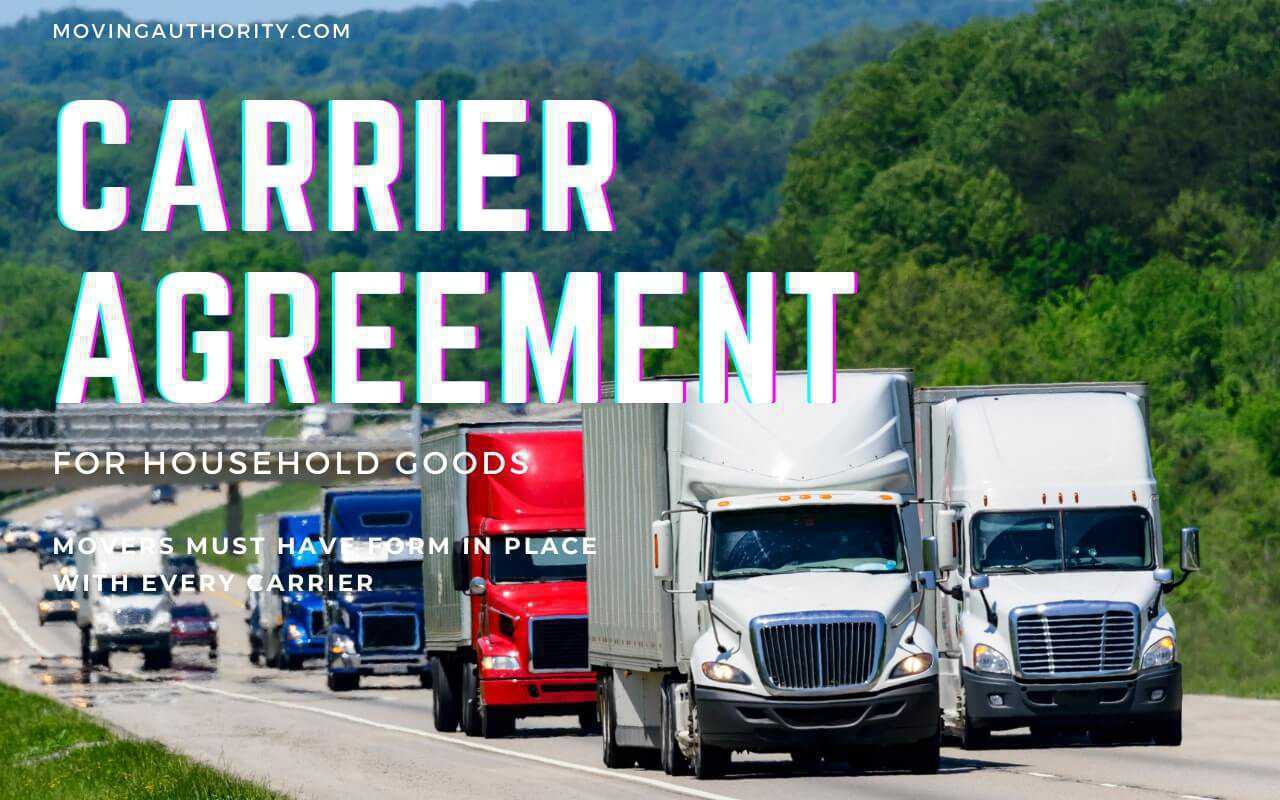 What’s an Example of a Carrier Agreement for Household Goods?

1. The carrier and customer’s information. (This includes the MC Number#.)
2. The date of the agreement.
3. The number of days to pay.
4. Specific procedures of invoicing.
5. Insurance and liability information.

Agreements are important because carriers must make sure that they will get paid. Plus, they need to know the level of liability that's required. Without a formal carrier agreement in place, household goods shipments cannot get booked and hauled.

How Do You Fill Out a Carrier Agreement for Household Goods?


This is to help ensure that you agree to each term within the document. Include the following information on the last page of each carrier agreement.

1. The company/carrier name.
2. An authorized signature.
3. A print name.
4. The title of the signee.
5. The address of the company.
6. The city, state, zip code, and country.
7. A phone number. You might also want to include an email address.

Many organizations will include a W-9 form to fill out that accompanies the carrier agreement. You can also include a copy of your authority and insurance information.

What Is the Difference Between a Household Goods Shipper and Carrier?

The carrier can do so on behalf of any company or person. But transportation is not valid under U.S. law until a carrier agreement gets signed by both parties. Keep in mind that carriers have more responsibilities than shippers do. Carriers are responsible for the potential loss of goods during transportation.

What Are the Types of Household Goods Carriers?

What Does "Carrier" Mean in Household Goods Trucking?

The role of the carrier is a simple concept when it comes to the logistics of household goods trucking. A carrier is any company that has the legal means to transport goods. Most carriers work with shippers. The carriers specialize in shipping goods from one location to another. But shipments are invalid unless a carrier agreement itself is valid. That’s why it’s important to make sure that your agreements meet all legal requirements. Otherwise, carriers risk receiving large fines and penalties. Feel free to contact our organization today for more information about carrier agreements.

I got the best carrier agreement from Moving Authority. I was impressed with how detailed and well put together it is. The service was superb. I will, of course, keep in touch. I highly recommend them.

I got the best carrier agreement from Moving Authority. I was impressed with how detailed and well put together it is. The service was superb. I will, of course, keep in touch. I highly recommend them.