HOW DO I MOVE A REFRIGERATOR ON ITS BACK

Moving poses a lot of questions that you might have not otherwise considered. For instance, you may never have realized that your door frame is less than three feet wide and your bed frame is four feet wide. Moving requires a lot of work and maybe even the disassembly of quite a few appliances. Don’t be the person that strikes an electrical cord while digging a hole in the backyard; be smart, do your research, and keep yourself safe.

2. Refrigerators are Challenging to Move

3. Let All of Your Food Thaw, Then Clean & Secure the Refrigerator

All your food will defrost and your refrigerator will cool to room temperature within a few hours. Once the ice box is completely defrosted, unplug it. Leave it unplugged for at least 24 hours before you move. There’s a chance that water might have accumulated as your fridge cooled and this can pose a safety hazard. Letting the fridge sit is a good way to let the water evaporate. When the refrigerator is completely dry, secure loose items like shelving and humidity drawers with tape, as well as the doors. You don’t want anything flying open during the move and breaking.

4. Transport on Side or Back

Secure the refrigerator on wheels for maximum mobility and always handle with extreme care. Refrigerators are heavy and awkward and one fall could do serious damage or injury. For extra padding, cover the refrigerator with a blanket or a mat that can be rented from your local movers. Refrigerators should be transported on their back or side while in the moving truck so as to prevent it from falling and breaking other objects. Do not lay it on the side where the hinges are located, this could crush them and then you won’t be able to open your fridge at your new place. If you must place it on its side and not flat on the ground, make sure the doors are secure. 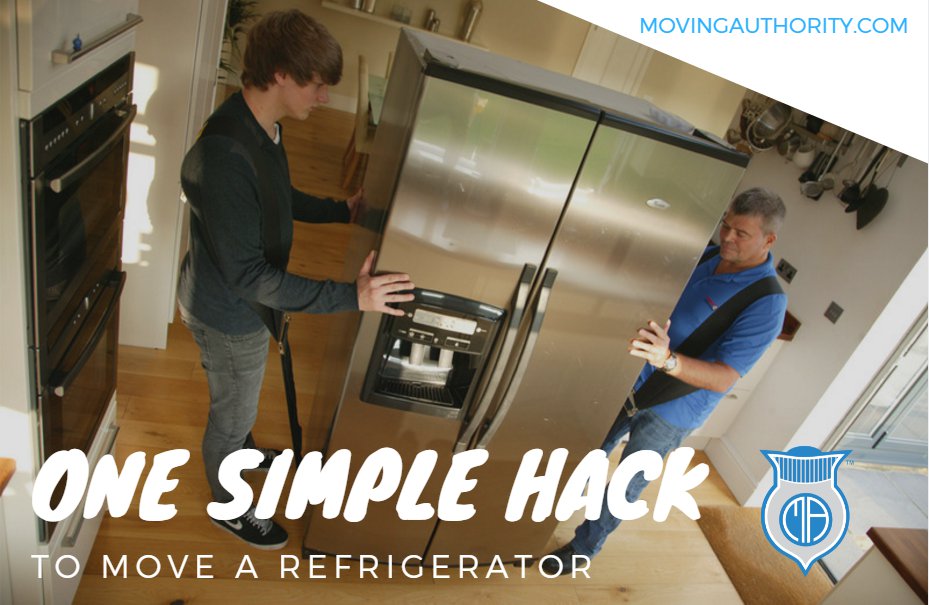 5. Be Prepared for Unexpected Surprises

Placing the refrigerator on its back is optimal when transporting it because the doors have a lower change of opening or being crushed. Even when we take precautions, we can’t account for the unexpected, and there are a lot of unexpected speed bumps while moving (literally and figuratively). With two people, slowly lower the fridge on an angle, letting it down gently. Use the muscles in your legs for support, rather than in your back to avoid unnecessary injury. Remember that if you lay the refrigerator on its back or side, to leave it standing stationary for the same amount of time. Toxic oils form the compressor may leak into the refrigeration system during transportation, letting the ice box sit will settle the oils in the system and prevent blockage. Don’t try this alone, always have help and always take all necessary precautions, your safety is worth it. Don't forget to take a look at the general purpose guide describing how to plan a move that fits your budget. It helps to be prepared and on point.

I appreciate this guide greatly, it has given me ideas on how I should proceed, however I was interested in knowing whether I should hire professionals for this, specifically if they can dismantle the refrigerator, maybe take it's doors off in some way? do movers have the tools for this, or how would you recommend to proceed.

Hello Roy. I would totally hire a moving company if you do not already know how to dismantle a fridge. A moving company has the proper tools and in the end it will cost you less money if you attempt to do it yourself and damage your fridge. Also you may need to buy new tools for this process that can be expensive and you might not have use for them other than this one task. You can place your info in the box above on the right to get an accurate quote to hire movers. Wish you luck with your move!

The Federal Bridge Gross Weight Formula is a mathematical formula used in the United States&nbsp;to determine the appropriate gross weight for a long distance moving vehicle, based on the axle number and spacing. Enforced by the Department of Transportation upon long-haul truck drivers, it is used as a means of preventing heavy vehicles from damaging roads and bridges. This is especially in particular to the total weight of a loaded truck, whether being used for commercial moving services or for long distance moving services in general. &nbsp; According to the Federal Bridge Gross Weight Formula, the total weight of a loaded truck (tractor and trailer, 5-axle rig) cannot exceed 80,000 lbs in the United States. Under ordinary circumstances, long-haul equipment trucks will weight about 15,000 kg (33,069 lbs). This leaves about 20,000 kg (44,092 lbs) of freight capacity. Likewise, a load is limited to the space available in the trailer, normally with dimensions of 48 ft (14.63 m) or 53 ft (16.15 m) long, 2.6 m (102.4 in) wide, 2.7 m (8 ft 10.3 in) high and 13 ft 6 in or 4.11 m high.

The Dwight D. Eisenhower National System of Interstate and Defense Highways is most commonly known as the Interstate Highway System, Interstate Freeway System, Interstate System, or simply the Interstate. It is a network of controlled-access highways that forms a part of the National Highway System of the United States. Named after President Dwight D. Eisenhower, who endorsed its formation, the idea was to have portable moving and storage. Construction&nbsp;was authorized by the Federal-Aid Highway Act of 1956. The original portion was completed 35 years later, although some urban routes were canceled and never built. The network has since been extended and, as of 2013, it had a total length of 47,856 miles (77,017 km), making it the world's second longest after China's. As of 2013, about one-quarter of all vehicle miles driven in the country use the Interstate system. In 2006, the cost of construction had been estimated at about $425 billion (equivalent to $511 billion in 2015).

With the ending of World War I, several developments were made to enhance trucks. Such an example would be by putting pneumatic tires replaced the previously common full rubber versions. These advancements continued, including electric starters, power brakes, 4, 6, and 8 cylinder engines. Closed cabs and electric lighting followed. The modern semi-trailer truck also debuted. Additionally, touring car builders such as Ford and Renault entered the heavy truck market.